Charles Gerald Bradshaw grew up on the chapped streets of Chilliwack, British Columbia. Known as Chuck Bradshaw or Chucky B in the music community by most.

His unusual upbringing shaped his robust musical and fashion taste into what we know and love today.

Raised in the shadow of a green jacket sporting Masters champion of '73, Bradshaw's father had a substantial influence on his fashion sense. His mother, best known for her backup dancing career with Rick James, was away often on the road shaking her groove thang. Fortunately for us, Charles found solace in the motherly embrace of Soul train, followed by Electric Circus which comforted him on those lonely PGA and long Super Freak tours.

After obtaining his first set of turntables at the supple age of 15, and tweaking his skills over the next few years, Chuck was an easy crowd pleaser in front of and behind the decks. You always knew the party arrived when the vibrant trousers and moustache entered the vicinity.

When asked about his music style, Chuck responded by saying "It's important the music I play comes from a place deep within, deep within the crevice of my loins. That is why deep and bassline house floats my goat, and I know it'll float your goat too. What's good for the goose is good for the gander". 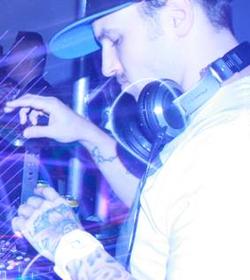